Dogecoin, Shiba Inu, Dogelon Mars, How Are They Doing So Far In 2022?

2021 was quite the bizarre year for meme coins as most of the coins outdid themselves in the year, seeing strangely insane rallies that caught the attention of virtually everyone. So significant were the rallies, that some of the meme coins even broke into the list of top 10 crypto by market capitalization for some period. However, this only lasted for so long as the last few months of the year saw the coins falling, thereby displacing them entirely from off the top 10 list.

Shiba Inu and Dogecoin: The Center of 2021 Meme Coins Craze

For all intents and purposes, both DOGE and SHIB saw very high rallies in 2021 that no one could have thought possible. Not even in the crypto world.

It all began when Tesla CEO, Elon Musk started tweeting frequently about Dogecoin after the automaker made its first purchase of Bitcoin. Musk’s tweets would later spark the unbelievable run that the coin had a short while after.

Shiba Inu would later draw inspiration from Dogecoin as many other new coins also did. SHIB and some other meme coins had rallies even more unbelievable than DOGE’s. The most notable one was Shiba Inu’s out-of-the-world rally in October where at a point, the meme coin surged 1000% in just 30 days.

By that time, Shiba Inu also made the top ten crypto by market cap list and even surpassed Dogecoin on the list for a while.

What Does The Future Hold For Meme Coins?

Most meme coins have now faltered, especially since the final months of last year and are now out of the top ten crypto list entirely.

In fact, an Arcane Research report predicts that most of the meme coins will go into obscurity in 2022, but we are only a week into the year. So let’s just take a look at how the coins are fairing at the moment.

At the time of writing, Dogecoin’s price floats around $0.1505, down 12.88% in the past 7 days. Here is a chart that shows the trend in the price of the coin over the last five days: 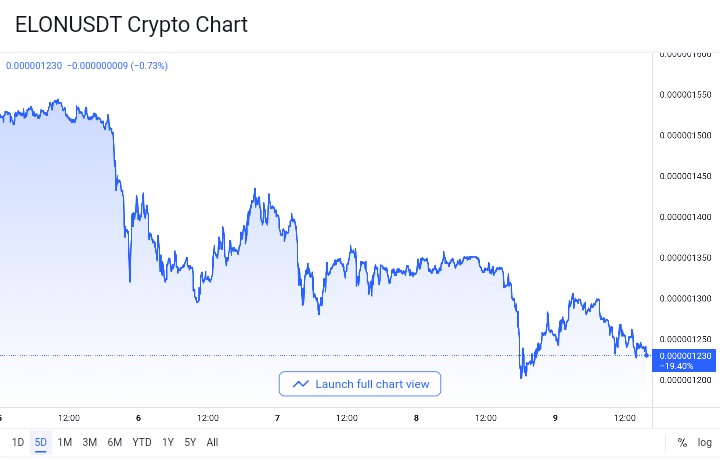 While they all seem to be on a downward trend, there is absolutely no cause for alarm yet. This is because there is a general downtrend in the entire crypto markets including Bitcoin and Ethereum. And obviously, Dogecoin and Shiba Inu are still holding their own in the meme coins world.

The presented content may include the personal opinion of the author and is subject to market condition. Do your market research before investing in cryptocurrencies. The author or the publication does not hold any responsibility for your personal financial loss.

Mayowa Adebajo is a fintech enthusiast with a decade long experience writing news stories and creating content generally. When he’s not writing, he’s either talking politics or discussing sports.

i sell 50% of my crypto portfolio…EXIT CRYPTO PLAN | NEWS

CryptoDaily Video: The Latest Updates In Financial And Crypto News