Non-fungible tokens (NFTs) have grown in leaps and bounds since the beginning of 2021. Despite breaking into the blockchain limelight just a year ago, NFTs have recorded over $15 billion in total recorded sales, pointing to a bright future. In the multitude of digital assets on offer, identifying top NFT cryptocurrency to invest in can be daunting.

This review will highlight promising NFT projects you should add to your portfolio.

Decentraland ranks as the number one NFT cryptocurrency to invest in right now. Based on the Ethereum network, Decentraland is a 3D virtual reality platform that allows users to create, share, and monetise content and applications on its platform.

Decentraland offers a 3D virtual plots of lands secured with the ERC-721 tokens called LAND. Each LAND is an NFT and users can choose to setup infrastructures in order to grow its value in the metaverse. Subsequently, this virtual real estate can be leased or outrighlty sold by the owner for significant gains on the Decentraland marketplace.

Operating as a decentralised autonomous organisation (DAO), Decentraland uses utility token MANA for governance. Hodlers can determine the direction the project is headed. At press time, MANA is trading at $2.816, up 1.49% in the last 24 hours.

Decentraland has become the focal point for the emerging Metaverse ecosystem. In a recent tweet, the Ethereum-based protocol announced an integration with CryptoArt.Ai. This would see the launch of the world’s first music album type NFT. 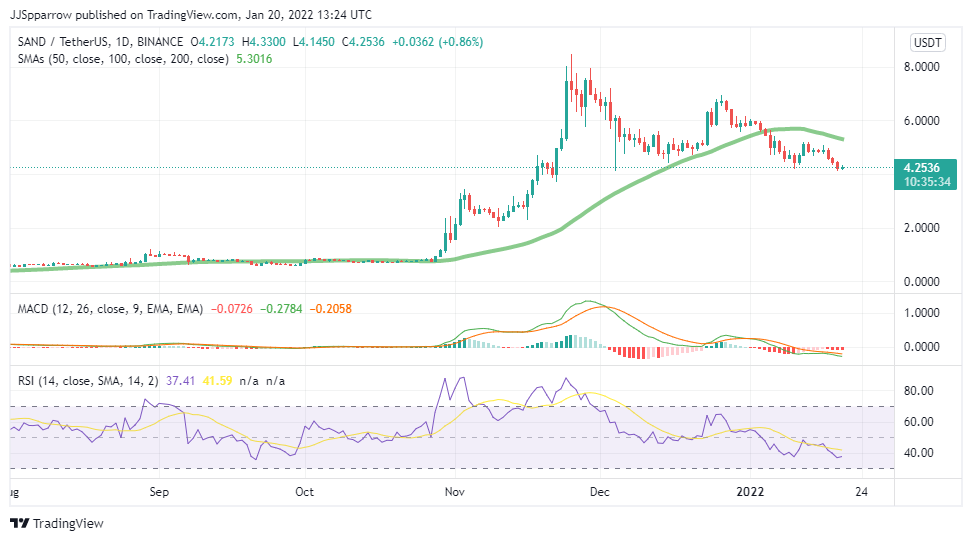 The Sandbox is another top NFT cryptocurrency to invest in as the crypto ecosystem sees widespread adoption. Another top contender for the fledgling Metaverse sub-sector, The Sandbox is out to revolutionise the gaming industry by allowing the creation, sharing, and monetisation of in-game assets.

The Sandbox has been gaining major traction in the past few months as the NFT token shot up to an all-time high (ATH) of $8.44 in late November. At press time, The Sandbox’s native token SAND is almost 50% of its record high, with the digital asset trading at $4.25 and is up 1.75% in the last 24 hours.

The Sandbox is seen by many as a robust NFT protocol, given its appeal to the thriving gaming community. Popular hip-hop star and rapper Snoop Dogg is a well-known backer of the project, still under development. ApesofSpaceNFT has recently launched on The Sandbox, further swelling the project’s appeal. 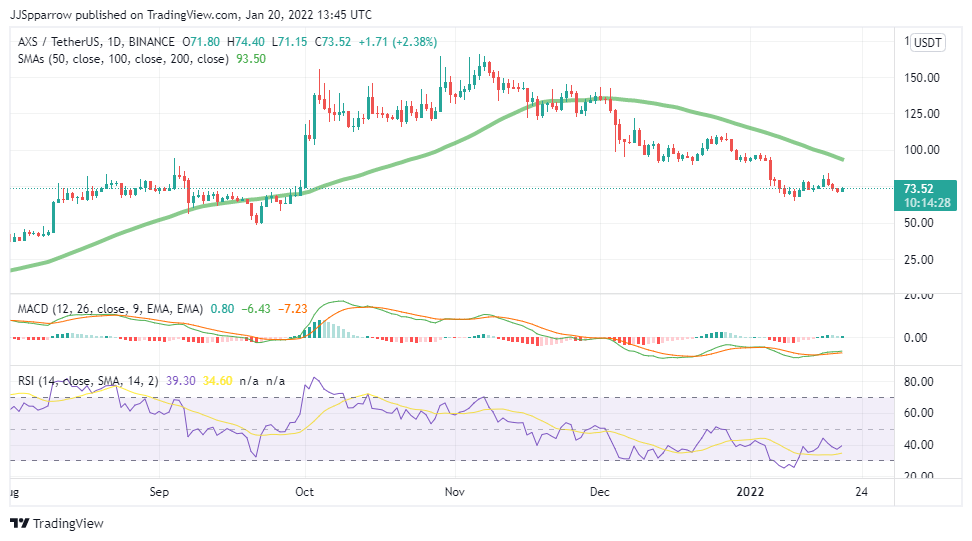 Axie Infinity is a top NFT cryptocurrency to invest in this year. Building on the strong appeal in gaming, Axie Infinity is a top-ranking NFT you should keep your eye on. The Pokemon-inspired NFT protocol has consequently ranked as the foremost in NFT sales, with over 2.5 million monthly active users (MAUs).

Axie Infinity is considered the holy grail in the NFT community due to the partial ownership players enjoy by utilising the protocol. Price-wise, Axie Infinity has continued to break through the walls, once hitting over $150 in record crypto bullish month.

The asset has continued to work on its protocol’s scalability and cost-efficiency and recently released its Ronin protocol – a layer-two platform.

According to a recent report by blockchain analytics firm Nansen, the Ronin blockchain processed 560% more transactions than the Ethereum blockchain in November, pointing to Axie Infinity’s growing influence in both NFTs and gaming.

At press time, AXS is trading at $73.5, up 1.90% in the past day. The digital token is seeing a slight buying signal with the moving average convergence and divergence (MACD) trendline pointing to a rise of the green line.

The relative strength index (RSI) of 39.8 shows that AXS is largely underbought, making now an ideal moment to buy AXS and tap into potential gain. 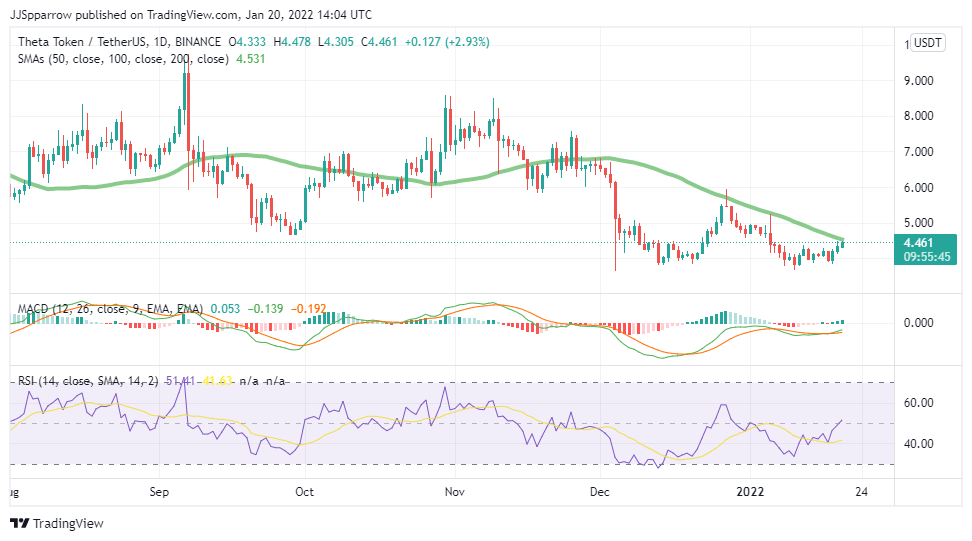 Theta’s decentralised nature makes it easy to stream videos while cutting through centralised control. The protocol has been on a tear in the past few months. Its ThetaDrop protocol has seen its traffic swell three times, spurring the release of the TDToken. ThetaDrop enables NFT Liquidity Mining.

In addition, the Theta blockchain has recently integrated with Curate protocol to enable seamless payments with THETA and TFUEL on the Curate Marketplace.

Price-wise, Theta’s THETA has been struggling with the bears and is trading at $4.46, down 0.15% in the past day. However, its RSI figure of 51.93 shows growing bullish beliefs among NFT investors. The MACD indicator also points to a growing buying opportunity for investors as the green trendline rises above its orange counterpart. 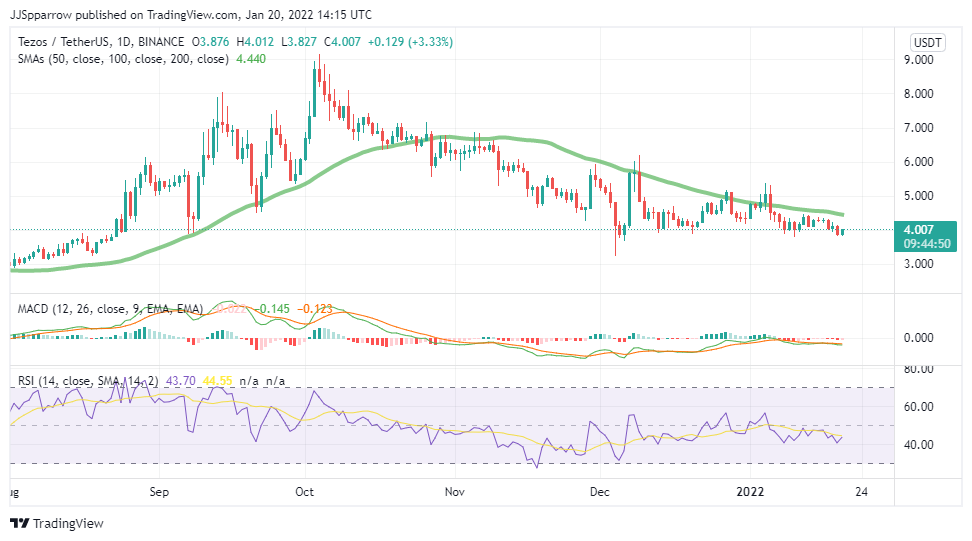 The Tezos blockchain is a clear top NFT cryptocurrency to invest in. For one, Tezos promises a more robust blockchain experience for users as it is more scalable, energy-efficient, and inexpensive. Tezos’ appeal lies in its self-upgradable software – a first in the blockchain ecosystem.

The Tezos blockchain team states that the protocol is future-oriented, making it easy for the protocol to scale without needing to perform a network hard fork.

Tezos’ strong value proposition has seen a lot of protocols, making the asset a choice destination. One of such is the European Tech School which recently partnered with Tezos-based Nomadic Labs to acclimatise students to blockchain technology.

Another is the NFT drop by NFT platform Gap on the Tezos blockchain. In terms of price, Tezos blockchain is trading at a bargain and currently trades at $4, with a 1.81% increase in the past day.

The digital asset’s MACD is trading in the neutral zone showing a face-off between the bulls and the bears. An RSI figure of 44.89 shows a strong potential to hit the overbought price peg in the coming days.

How to Buy Tezos (XTZ) Coin in India