Several alts that made astronomical gains in 2021 are now at key support levels having suffered huge drops from their highs last year. These may represent great buying opportunities for those who believe this is a mid-cycle correction, but they could also signal the end of the bull market itself.

The first example of these big names is Solana (SOL), which topped out at $260 in November last year but is now trading at around $85:

SOL is now close to erasing six months worth of gains and is at the same time approaching a crucial level of support at the $75 level. This provided resistance back in August and acted as the launchpad for its run to $260. Should this region hold then it looks to be an attractive place to pick up more, but a drop underneath this level could see the following scenario:

Should this $40 level be reached then that would represent an 84% drop from its high, which is the kind of reset we have seen plenty of times with alts in the past.

AVAX in a Similar Position

We can see a similar setup for another 2021 favorite, Avalanche (AVAX):

AVAX has already wicked into a key support area which has held for now, but it looks more likely that this area will be retested in the not too distant future. Should it fall through this region then we have a big drop to the next level of support:

Again we’re looking at the $40 level for the next support for AVAX, which would represent a 75% drop from its high.

Some Alts Look Worse Than Others

As bad as these charts might be, they could be worse. DOGE for example has been on a slow death spiral since the Elon-boom of early 2021 and is closing in on losing eight months worth of gains amount to a 90% drop: 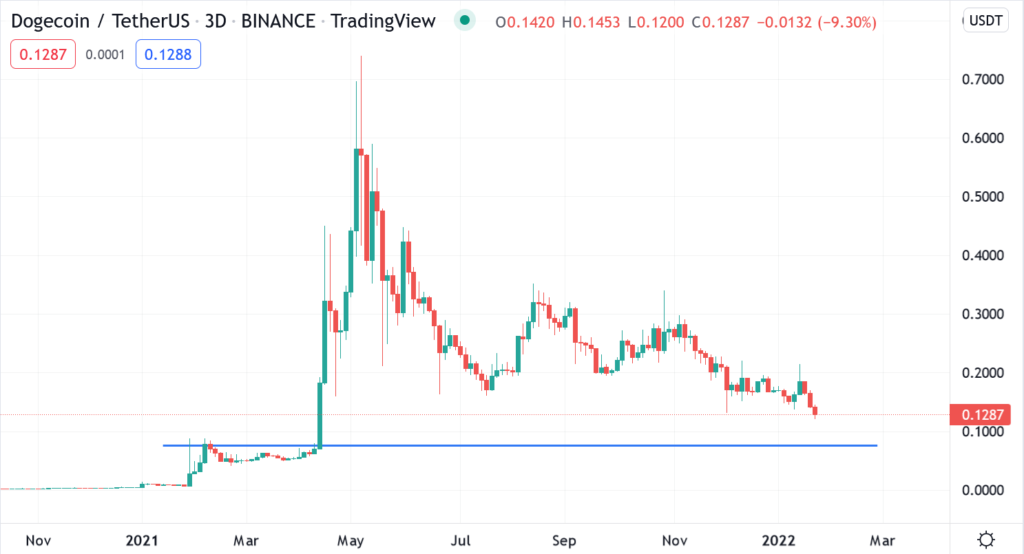 This at least answers a question we asked around this time last year.

For those who think these kinds of drops (in tandem with Bitcoin’s) are just typical bull market reversals then picking up big name alts at these levels is a steal. However, with Bitcoin flirting with its own key support at $30,000 then buying at these levels might still represent poor business.

I will Buy More If Bitcoin Retest $20k

I will Buy More If Bitcoin Retest $20k