Bitcoin’s Lightning Network, the Layer 2 protocol that enables instant and cheap sending of BTC, has been breaking records just five weeks into the new year. The number of nodes and channels as well as the cumulative amount of BTC held in the Lightning Network has broken new ground in 2022 with notable milestones being broken along the way. The continued success of the Lightning Network is further proof of Bitcoin’s ability to scale and evidence that it can work as the payment medium that was envisaged in 2008 without having to change the protocol itself.

This means that adoption of the Bitcoin Lightning Network is increasing at a faster rate, helped in no small way by Latin American countries, in particular El Savador, whose Chivo system runs on Lightning Network:

Alongside this rapid increase in nodes has come an equally dramatic rise in the number of channels, with the network now boasting over 83,000 unique payment channels, which has doubled at the same rate as the nodes:

The real action however can be seen in the amount of BTC committed to the Lightning Network. Having stagnated for almost two years between 2019 and 2021, the past 12 months has seen an explosion in the BTC currently sitting on the network, leaping from 1,060 at the start of 2021 to 3,320 a year later. This staggering rise takes into account Bitcoin’s two price collapses in 2021, which don’t seem to have affected actual adoption at all: 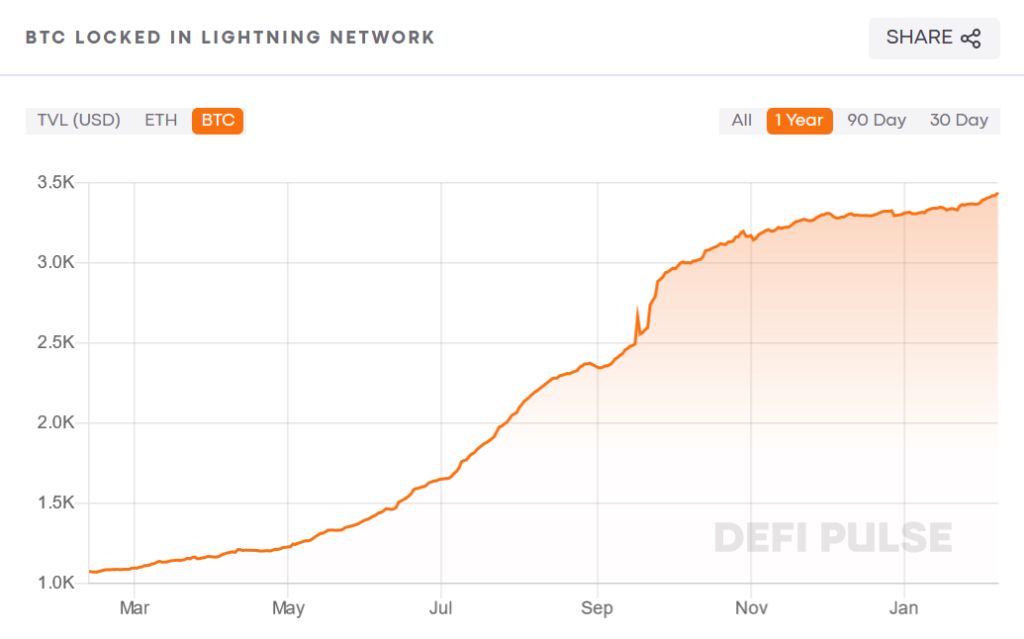 This incredible rise put the USD value of the BTC currently in the Lighting Network at $146.5 million, a figure scarcely believable just six months ago. The fact that Bitcoin Lightning Network adoption continues to grow despite huge price corrections is a sign that Bitcoin adoption is growing at genuinely exciting levels on an almost daily basis.

How to DEX? With the Conference.Exchanges